Thomas Pradzynski (29 November 1951 – 21 December 2007) was a Polish painter. Born in ?ód? in 1951, he attended the Lycée Français in Warsaw, where he received a master's degree in sociology and economics.

In 1977, at the age of 26, Thomas Pradzysnki left his native Poland for Paris with the goal of becoming a renowned artist, and that he did.

Thomas Pradzynski, known for his Parisian cityscapes and whose work has been represented in numerous galleries for over 25 years in the U.S., Japan, and Canada, passed away on December 21, 2007, at the age of 65.

Pradzynski's paintings of city streets are often referred to as "realistic".  This does not imply a mechanical reproduction onto paper.  Rather the realism of Pradzynski's weathered buildings and inanimate objects offer a unique insight into the life of a city. Pradzynski's work explores and wanders the streets of Paris like a solitary lover for whom every window, doorway and Cafe are filled with meaning.  His windows, chairs, and doorways become actors who perform for us, his audience.  Each is a thought provoking creation.

The very best in Parisian Art - Paris at a Bargain! 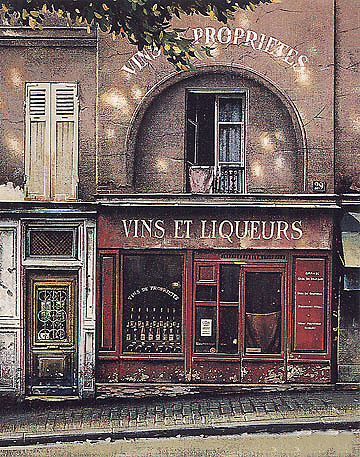